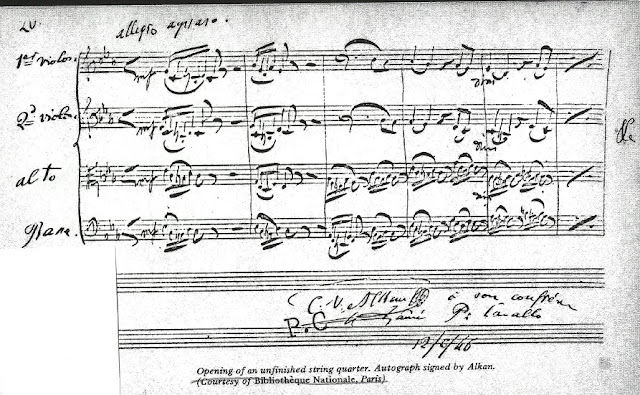 Back in 2013, I was through-composing all my music at the piano, and although conceptualism and process-based composition methods have intrigued me, I have not had enough bravery to construct a piece entirely by process. And so, when my friend Matthew Lee Knowles commissioned me to write a little string quartet based on a short fragment by Charles-Valentin Alkan, I thought this would be a perfect opportunity to finally attempt this method of composition – and I have never looked back!  Matthew’s own work, with its uncompromising conceptualism, have certainly played a major part in my decision. The fact that the fragment in question and Alkan’s music in general was not known to me was also important. I felt that my piece needs to somehow comment on the arbitrary nature of this commission and distance myself from the source material. I began by thinking about the ways I could approach the fragment. I felt that there were two ways to do this – as a musical fragment or as a fragme
Post a Comment
Read more 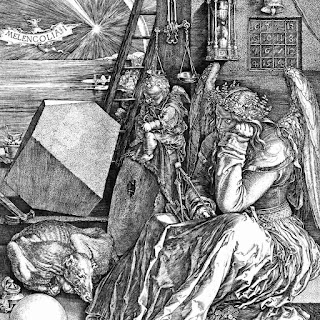 My good friend and student Roberta shares with me a certain fascination with numerology – an occult study of number patterns (limited to their applicability in music, in my case). There is even a reproduction of a magic square (an arrangement of numbers where rows, columns and diagonals add up to the same sum – the “magic number”) on one of the walls in her house – the square that appears in Melancholia , an engraving by Albrecht Dürer.
Post a Comment
Read more 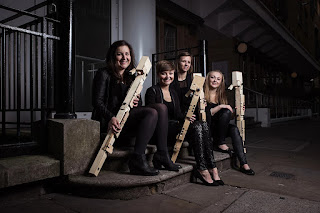 In July 2015, the composer Nicholas Peters and I were organising a concert as part of our ongoing series 840 that featured the recorder quartet BLOCK4 and I was to write a piece for them. The ensemble had numerous instruments in their disposal – the usual sets of medieval and renaissance recorders as well as a set of Paetzolds – large, modern, box-like instruments that look like something from an Ikea flat-pack. The musicians wanted the composers to mix and match the instruments from the different sets and I was happy to oblige – I picked two renaissance tenor recorders and two Paetzold basses. The piece was going to be premiered in St James' Islington – an Anglican church. I found it curious that I, an atheist living in the 21st century, was writing music for medieval instruments to be performed in a church. The resulting composition was an attempt to reflect on these circumstances.
Post a Comment
Read more